Net sales in the third quarter increased 9% versus prior year due mainly to the pass through of higher styrene and butadiene costs. In addition, higher sales volume in the Performance Plastics, Synthetic Rubber and Feedstocks segments was partially offset by lower sales volume in the Latex Binders and Polystyrene segments. Third quarter net income of $75 million was $42 million higher than prior year. Third quarter Adjusted EBITDA of $143 million was $23 million lower than prior year.

Prior year third quarter net income included a pre-tax charge of approximately $66 million related to the Company’s debt refinancing. In addition, the prior year third quarter results included an unfavorable pre-tax net timing impact of $24 million in comparison to an unfavorable impact of $4 million in the current year. Excluding these impacts, the lower year-over-year profitability was due to generally higher raw material costs, a slowdown in the automotive and tire markets, as well as a slowdown in demand across numerous end markets in China. In addition, in Polystyrene, we saw inventory destocking as customers awaited lower styrene prices in the fourth quarter.

Commenting on the Company’s performance, Chris Pappas, Trinseo President and Chief Executive Officer, said, “Our strong profitability in the first half of 2018 was met with challenges in the third quarter due to a variety of market factors that appeared late in the quarter. However, the diversity of our product portfolio assisted us in offsetting some of these challenges. We continue to exhibit strong cash generation and returned $52 million to shareholders via share repurchases and dividends during the quarter, and $144 million so far in 2018.”

Commenting on the outlooks for the fourth quarter and full year 2018 and full year 2019, Pappas said, “We expect sequentially lower profitability in the fourth quarter due primarily to lower styrene margins. In the short-term, we see a continuation of the market conditions that affected the latter part of the third quarter, but we believe that as we progress into 2019 we will see some return to more normal buying patterns as supply chains begin to normalize, automotive production increases in Europe with more models passing the new WLTP standards and as the impact of China stimulus programs begins to become apparent. Overall, 2019 should be another year of solid earnings and very strong cash generation for Trinseo.”

For a reconciliation of fourth quarter and full year 2018 net income to Adjusted EBITDA and Adjusted EPS, see note 2 below. Additionally, refer to the appendix within Exhibit 99.3 of our Form 8-K, dated November 8, 2018, for further details on how net timing impacts are defined and calculated for our segments.

Trinseo will host a conference call to discuss its third quarter 2018 financial results on Friday, November 9, 2018 at 10 AM Eastern Time.

Trinseo has posted its third quarter 2018 financial results on the Company’s Investor Relations website. The presentation slides will also be made available in the webcast player prior to the conference call. The Company will also furnish copies of the financial results press release and presentation slides to investors by means of a Form 8-K filing with the U.S. Securities and Exchange Commission.

Condensed Consolidated Statements of Operations
(In millions, except per share data)
(Unaudited) 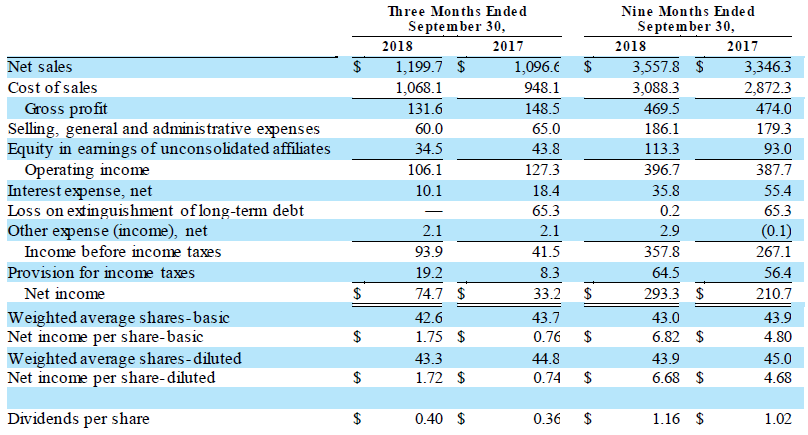 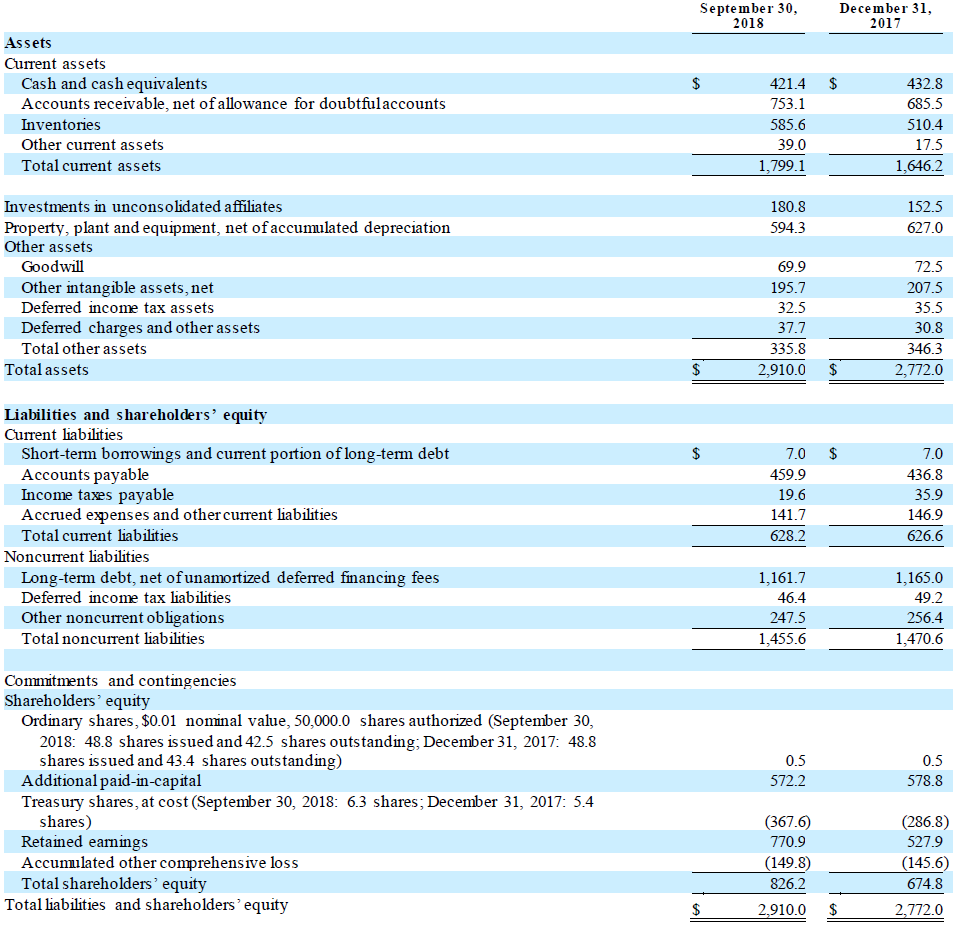 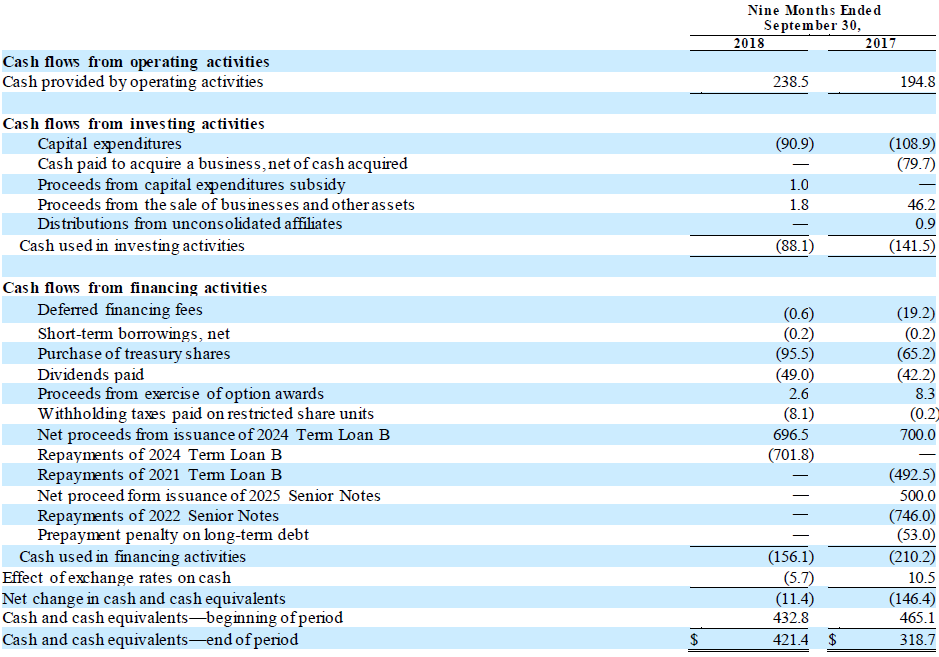 * The results of this segment are comprised entirely of earnings from Americas Styrenics, our 50%-owned equity method investment. As such, we do not separately report net sales of Americas Styrenics within our condensed consolidated statement of operations.

We also present Adjusted EBITDA as a non-GAAP financial performance measure, which we define as income from continuing operations before interest expense, net; income tax provision; depreciation and amortization expense; loss on extinguishment of long-term debt; asset impairment charges; gains or losses on the dispositions of businesses and assets; restructuring charges; acquisition related costs and other items. In doing so, we are providing management, investors, and credit rating agencies with an indicator of our ongoing performance and business trends, removing the impact of transactions and events that we would not consider a part of our core operations. 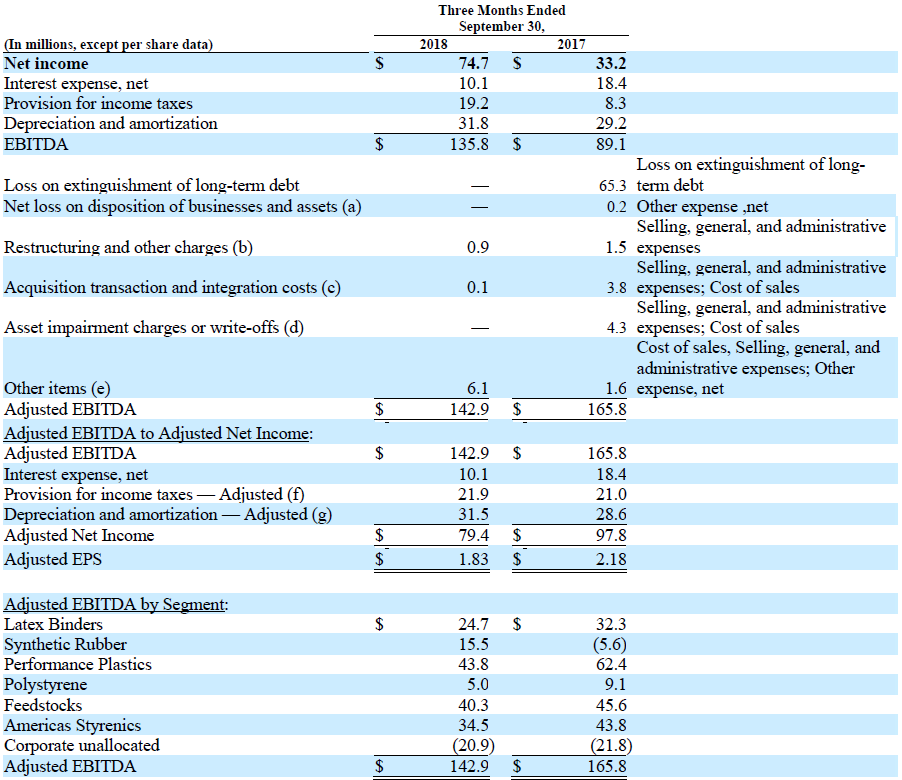 (a) Net loss on disposition of businesses and assets during the three months ended September 30, 2017 relates to charges incurred in connection with the sale of the Company’s latex and automotive businesses in Brazil.

(d) Asset impairment charges or write-offs for the three months ended September 30, 2017 relate to the impairment of certain long-lived assets within the Company’s Performance Plastics segment.

(f) Adjusted to remove the tax impact of the items noted in (a), (b), (c), (d), (e), and (g). The income tax expense (benefit) related to these items was determined utilizing either (1) the estimated annual effective tax rate on our ordinary income based upon our forecasted ordinary income for the full year, or (2) for items treated discretely for tax purposes, we utilized the applicable rates in the taxing jurisdictions in which these adjustments occurred. Additionally, the three months ended September 30, 2018 excludes a $0.9 million discrete tax benefit related to certain legal entity restructurings, as well as $0.6 million in tax benefits related to provision to return adjustments.

(g) For the three months ended September 30, 2018 and 2017 the amounts exclude accelerated depreciation of $0.3 million and $0.6 million, respectively, related to the upgrade and replacement of the Company’s compounding facility in Terneuzen, The Netherlands.

For the same reasons discussed above, we are providing the following reconciliation of forecasted net income to forecasted Adjusted EBITDA and Adjusted EPS for the three months ended  December 31, 2018, as well as for the full year ended December 31, 2018.  See “Note on Forward-Looking Statements” above for a discussion of the limitations of these forecasts.

(i) Weighted average shares calculated for the purpose of forecasting Adjusted EPS do not forecast significant future share transactions or events, such as repurchases, significant stock-based compensation award grants, and changes in the Company’s share price. These are all factors which could have a significant impact on the calculation of Adjusted EPS during actual future periods.

Trinseo (NYSE:TSE) is a global materials solutions provider and manufacturer of plastics, latex binders, and synthetic rubber with a focus on delivering innovative, sustainable, and value-creating products that are intrinsic to our daily lives. Trinseo is dedicated to making a positive impact on society by partnering with like-minded stakeholders, and supporting the sustainability goals of our customers in a wide range of end-markets including automotive, consumer electronics, appliances, medical devices, packaging, footwear, carpet, paper and board, building and construction, and tires. Trinseo had approximately $3.0 billion in net sales in 2020, with 17 manufacturing sites around the world, and approximately 2,600 employees. For more information, please visit: www.trinseo.com.

On January 1, 2018, the Company adopted pension accounting guidance that requires employers to present the service cost component of net periodic benefit cost in the same statement of operations line item as other employee compensation costs arising from services rendered during the period. As a result of this adoption, for the three and nine months ended September 30, 2017, the Company reclassified net periodic benefit cost of $1.4 million and $3.8 million, respectively, from “Cost of sales”, and $0.7 million and $2.2 million, respectively, from “Selling, general, and administrative expenses”, to “Other expense (income), net” within the condensed consolidated statement of operations.

In addition to using standard measures of performance and liquidity that are recognized in accordance with accounting principles generally accepted in the United States of America (“GAAP”), we use additional measures of income excluding certain GAAP items (“non-GAAP measures”), such as Adjusted Net Income, EBITDA, Adjusted EBITDA and Adjusted EPS and measures of liquidity excluding certain GAAP items, such as Free Cash Flow. We believe these measures are useful for investors and management in evaluating business trends and performance each period. These income measures are also used to manage our business and assess current period profitability, as well as to provide an appropriate basis to evaluate the effectiveness of our pricing strategies. Such measures are not recognized in accordance with GAAP and should not be viewed as an alternative to GAAP measures of performance or liquidity, as applicable. The definitions of each of these measures, further discussion of usefulness, and reconciliations of non-GAAP measures to GAAP measures are provided in the Notes to Condensed Consolidated Financial Information presented herein.

This press release may contain “forward-looking statements” within the meaning of the safe harbor provisions of the United States Private Securities Litigation Reform Act of 1995. Words such as “expect,” “estimate,” “project,” “budget,” “forecast,” “see,” “anticipate,” “target,” “outlook,” “guidance,” “intend,” “plan,” “may,” “will,” “could,” “should,” “believes,” “predicts,” “potential,” “continue,” and similar expressions are intended to identify such forward-looking statements. Forward-looking statements in this press release may include, without limitation, forecasts of performance, growth, net sales, business activity, and other matters that involve known and unknown risks, uncertainties and other factors that may cause results, levels of activity, performance or achievements to differ materially from results expressed or implied by this press release. Such factors include, among others: conditions in the global economy and capital markets; the inability of the Company to execute on its business strategy; volatility in costs or disruption in the supply of the raw materials utilized for our products; loss of market share to other producers of chemical products; compliance with laws and regulations impacting our business; changes in laws and regulations applicable to our business; our inability to continue technological innovation and successful introduction of new products; system security risk issues that could disrupt our internal operations or information technology services; the loss of customers; the market price of the Company’s ordinary shares prevailing from time to time; the nature of other investment opportunities presented to the Company from time to time; and the Company’s cash flows from operations. Additional risks and uncertainties are set forth in the Company’s reports filed with the United States Securities and Exchange Commission, which are available at http://www.sec.gov/ as well as the Company’s web site at http://www.trinseo.com. As a result of the foregoing considerations, you are cautioned not to place undue reliance on these forward-looking statements, which speak only as of the date of this press release. All forward-looking statements are qualified in their entirety by this cautionary statement. The Company undertakes no obligation to publicly update or revise any forward-looking statements, whether as a result of new information, future events or otherwise.