Trinseo (NYSE: TSE), a global materials company and manufacturer of plastics, latex and rubber, today reported its third quarter of 2014 financial results with revenue of $1,305 million and Adjusted EBITDA of $62 million.

Commenting on the company’s performance, Chris Pappas, Trinseo President and Chief Executive Officer, said, “Third quarter adjusted EBITDA was sequentially lower due to weaker economic conditions, customer inventory destocking driven by dropping oil prices, raw material dynamics in our Styrenics segment, a planned turnaround in Synthetic Rubber and seasonality in Europe. Our results for our Rubber, Latex, Automotive and Consumer Essential Markets businesses were, in aggregate, in line with our expectations. We did have a shortfall versus expectations in Styrenics, in both Americas Styrenics and in styrene monomer and polystyrene margins. This was driven by the combination of weaker Europe and Asia economic conditions.”

Revenue in the third quarter was roughly flat to prior year as higher SSBR volume and a favorable foreign exchange impact were offset by lower price which was primarily driven by the pass through of lower raw material cost. Sequentially, revenue decreased by 3% due to lower sales volume, with seasonality and weaker economic conditions in Europe, as well as an unfavorable currency impact as the U.S. dollar strengthened compared to the euro.

Adjusted EBITDA for the quarter decreased $10 million, or 14%, versus the prior year. This decrease was driven by lower styrene monomer production margin and lower equity affiliate income which were partially offset by favorable raw material purchase timing as well as higher SSBR sales volume. In addition, prior year results included a $12 million foreign exchange loss compared to a $2 million gain in the current year. Sequentially, Adjusted EBITDA decreased $18 million, or 22%, due to the turnaround at our Schkopau, Germany Rubber plant, lower styrene and polystyrene margins, higher bisphenol-A cost in Polycarbonate, and seasonality in Europe.

On July 14 we used the proceeds from our IPO to repay $132.5 million face amount of our Senior Secured Notes due 2019 at a redemption price equal to 103% of the principal amount, plus accrued and unpaid interest. Free cash flow for the quarter was negative $19 million, which included $60 million of cash interest, $14 million of capital expenditures, and $7.5 million of dividends received from Americas Styrenics. Quarter-end liquidity was $631 million.

Commenting on the outlook for the fourth quarter of 2014 Pappas said, “Overall we expect a stronger fundamental performance in the fourth quarter as compared to the third quarter. We expect sequential improvements in Synthetic Rubber, which is coming out of the third quarter turnaround; Styrenics, from improving styrene margins; and Engineered Polymers, as we start to see cost savings from our exit of Freeport. However, we see some challenges with a weakening euro as well as a possible substantial, unfavorable inventory revaluation impact with declining raw material costs.”

Trinseo will host a conference call to discuss its third quarter 2014 financial results tomorrow, Friday, November 14, 2014 at 10 AM Eastern Time.

The Company will also offer a live, listen-only Webcast of the conference call on the Trinseo Investor relations website.

Trinseo has posted its third quarter 2014 financial results on the Company’s Investor Relations website. The presentation slides will also be made available in the webcast player prior to the conference call. The Company will also furnish copies of the financial results press release and presentation slides to investors by means of a Form 8-K filing with the U.S. Securities and Exchange Commission (SEC).

Formerly known as Styron, Trinseo previously announced plans to change the name of all Styron affiliated companies to Trinseo. Some, but not all, of the Styron companies have completed the name change process and are currently known as Trinseo; Styron companies that have not completed this process will continue to do business as Styron until their respective name changes are complete. Styron’s operating companies also continue to do business as Styron at this time. 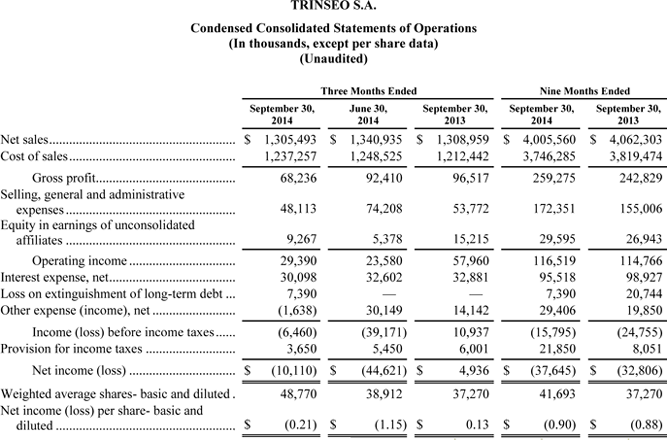 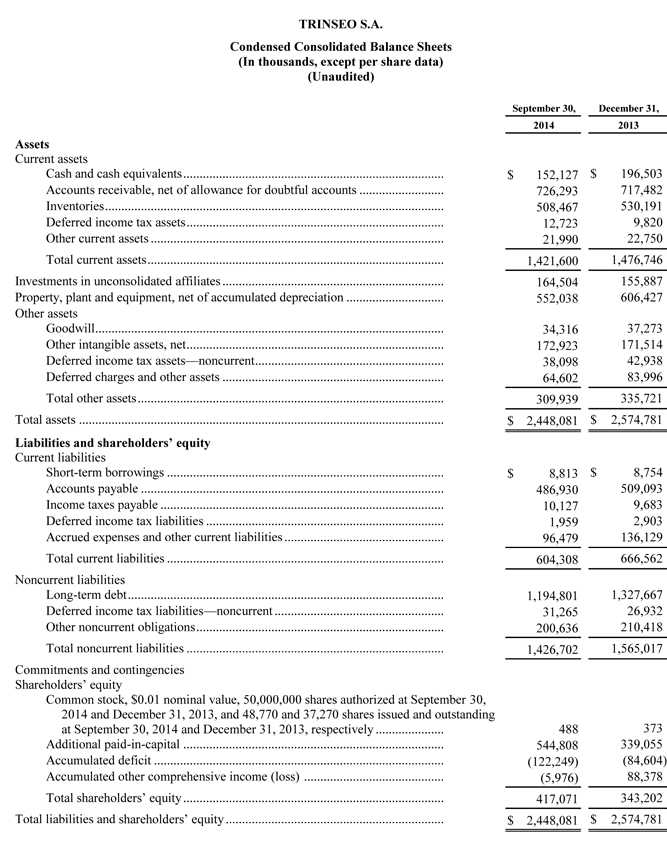 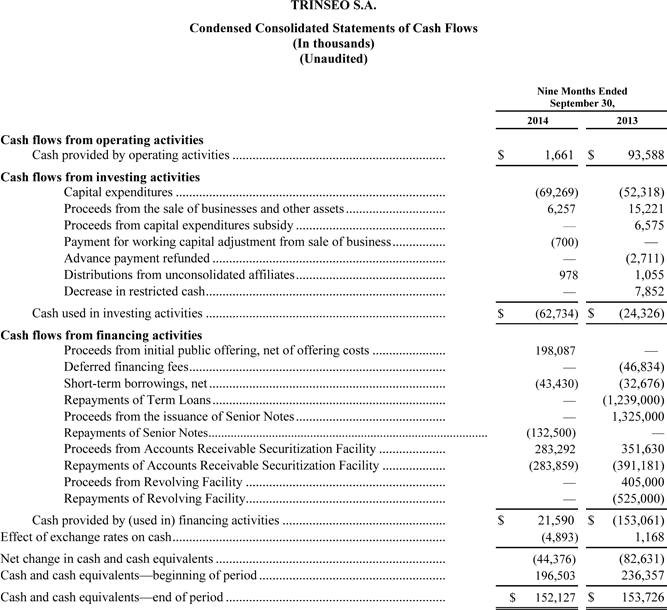 We also believe that the presentation of Adjusted EBITDA and Adjusted EBITDA excluding inventory revaluation provides investors with a useful analytical indicator of our performance and of our ability to service our indebtedness. We define Adjusted EBITDA as income (loss) from continuing operations before interest expense, net; income tax provision; depreciation and amortization expense; loss on extinguishment of long-term debt; asset impairment charges; advisory fees paid to affiliates of Bain Capital; gains or losses on the dispositions of businesses and assets; restructuring and other non-recurring items. 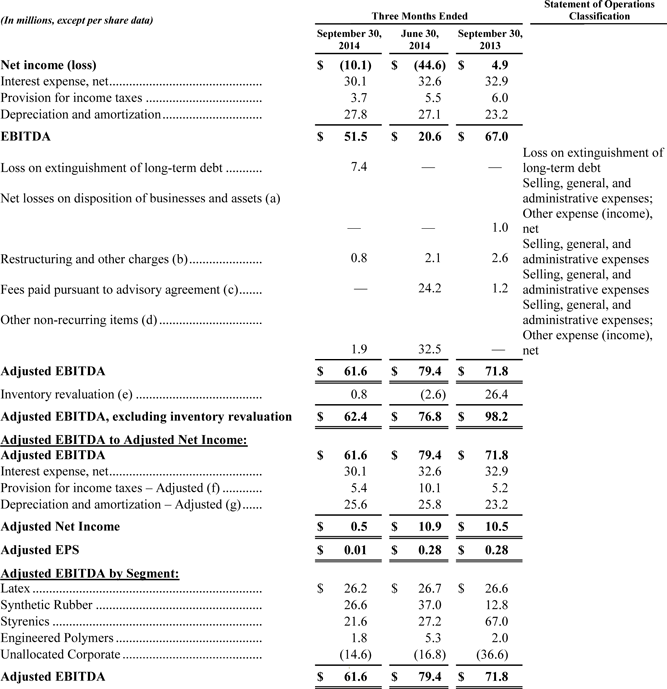 This press release may contain “forward-looking statements” within the meaning of the safe harbor provisions of the United States Private Securities Litigation Reform Act of 1995. Words such as “expect,” “estimate,” “project,” “budget,” “forecast,” “anticipate,” “intend,” “plan,” “may,” “will,” “could,” “should,” “believes,” “predicts,” “potential,” “continue,” and similar expressions are intended to identify such forward-looking statements. Forward-looking statements in this press release may include, without limitation, forecasts of growth, revenues, business activity, acquisitions, financings and other matters that involve known and unknown risks, uncertainties and other factors that may cause results, levels of activity, performance or achievements to differ materially from results expressed or implied by this press release. Such risk factors include, among others: conditions in the global economy and capital markets, volatility in costs or disruption in the supply of the raw materials utilized for our products; loss of market share to other producers of styrene-based chemical products; compliance with environmental, health and safety laws; changes in laws and regulations applicable to our business; our inability to continue technological innovation and successful introduction of new products; system security risk issues that could disrupt our internal operations or information technology services; and the loss of customers. Additional risks and uncertainties are set forth in the Company’s reports filed with the United States Securities and Exchange Commission, which are available at https://www.sec.gov/ as well as the Company’s web site at https://www.trinseo.com. As a result of the foregoing considerations, you are cautioned not to place undue reliance on these forward-looking statements, which speak only as of the date of this press release. All forward-looking statements are qualified in their entirety by this cautionary statement. The Company undertakes no obligation to publicly update or revise any forward-looking statements, whether as a result of new information, future events or otherwise.